SAFE PRODUCTIVITY AT THE LEADING EDGE

•  high level of safety
•  integrated tie off point every 7.5 feet
•  universal application - can be used with
Q-deck or cast-in-place attachments
•  ease and speed of installation
•  durability/longevity
•  environmentally friendly
•  great looking job site
•  high long-term return on investment
•  a responsive and professional company
with a high level of customer service

The company examined various edge protection alternatives through market research, vendor interviews and advice from the field. The solution they settled on was provided by Highland Safety Systems. Highland’s EDGE7 system, in their opinion, was set apart from the other options both in terms of the company and the product itself. The company felt that one of the key advantages of the EDGE7 system was the engineered and fully compliant integrated tie off point located at the base of every post, spaced at 7’6” on centre. Further benefits were identified involving both safety, universality and cost-effectiveness.

The EDGE7’s integrated tie off ring ingeniously addressed what the company had previously considered to be a whole other set of safety issues. The tie-off ring removed the temptation to neglect tying off for short-term access to the slab edge, also saving the time and cost required to locate or even set up a suitable tie-off point. In addition, because the EDGE7 panels are attached to the post supports without the need for complicated ties, access to the slab edge became even more efficient, and compliant re-installation of the panels was failsafe.

The company found the EDGE7 system to be extremely robust. The galvanized steel components provided them with a ‘bullet-proof’ edge protection system that would last for many years. Ease of installation was identified by the company as cost saver. A much lower install time freed workers up to spend time on other critical areas of the project. Furthermore, the EDGE7 system was found to be a universal solution for many job types based on the available Q-deck EMBED and CAST in place attachment accessories.

The following cost analysis is based on 2008 numbers provided by the company. They did a thorough cost breakdown of the switch to the EDGE7 system. Based on the analysis of a 128’ slab edge with a labourer at $40/hour and a carpenter at $50/hour plus the cost of the materials, traditional wood railings were estimated to cost $1,040. The cost of labour at the same rates, plus the initial outlay of cash for the EDGE7 system was estimated at $3,839.76. The company furthered the long term benefits of the system by purchasing it into their yard stores account. They then sent it out to sites at a reduced rate averaging 50% of the cost, bringing the cost down to an average of $1,884.50. A deeper look at these figures will reveal that, based on a 15-year life expectancy of the EDGE7 system, savings will already begin to pile up on the second project of use.

In September of 2008 a large international construction company began to look for an edge protection system that would address the issues they identified with their current use of traditional wood handrails. The company found that the wood handrails did not provide adequate protection. They didn’t provide debris protection, the load resistance was not up to safety standards, there was no quick and safe way to gain access to the slab edge, and there was a tremendous amount of waste involved - both in the labour to build, install and dismantle, as well as in large volumes of material ending up in landfill. It was simply not a green, efficient or safe method of providing edge protection.

The company went to the market to search for an alternative solution. They were surprised to find just how little was out there. They were also surprised to discover how innovative the system they settled on really was. 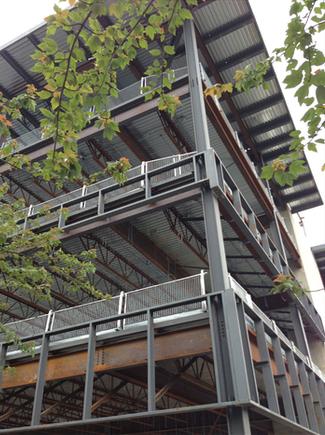